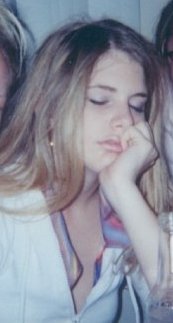 When I started writing on this blog, I wasn’t sure how much of my self I wanted to share and what information I wanted to put out there for 10 people the world to read (and possibly judge). However, lately I’ve been having more and more issues and I feel like I need to get it out there. This is partly to provide some sort of understanding about me and my daily life, and partly as a therapeutic release for myself. So here’s my story…

I have narcolepsy. Most people I talk to have little to no idea what the hell that even is, so I will give you a rundown. Disclaimer- I am not a medical professional so please excuse my simplified description. Narcolepsy is a sleep/neurologic disorder that affects every single second of my life. It causes me to have unrestful sleep and excessive daytime sleepiness (EDS). Here is a more technical definition for you from the experts: Narcolepsy is a chronic brain disorder that involves poor control of sleep-wake cycles. People with narcolepsy experience periods of extreme daytime sleepiness and sudden, irresistible bouts of sleep that can strike at any time.  These “sleep attacks” usually last a few seconds to several minutes. Narcolepsy Fact Sheet

Narcolepsy is a medical disorder that impacts 1 in approximately 2,000 people in the United States and many people are unaware of the condition and go undiagnosed. The disease is a sleep disorder, involving irregular patterns in Rapid Eye Movement (REM) sleep and significant disruptions of the normal sleep/wake cycle. While the cause of narcolepsy is not completely understood, current research points to a combination of genetic and environmental factors that influence the immune system. Narcolepsy Network

I was diagnosed in 2009 while studying for the bar exam. Convenient, right? I had been re-diagnosed with mono the year prior, after having it the first time in high school. I could not seem to shake the unrelenting sleepiness I felt every day, regardless of how much sleep I got the night before. After countless unproductive visits to my primary doctor, he finally referred me to a sleep neurologist. The sleep neurologist diagnosed me with narcolepsy based on my symptoms and based on my score on the Epworth Sleepiness Scale.

A sleep study was then scheduled to confirm the diagnosis. The sleep study consisted of me going to this random suite in a strip mall at 9:00 P.M. one night where I was hooked up with wires, sensors, and a bunch of other medical crap I can’t even explain. I then was shown to my room, which had the most comfortable bed of all time. My job: go the hell to sleep. I finally fell asleep and was awoken in the morning by some strange woman in scrubs asking me what I wanted for breakfast. She told me they’d go pick me up whatever I wanted so I placed my order for McDonald’s hash browns and a large Diet Coke and thought, “Hey this isn’t so terrible!” She then told me I could do whatever I wanted but that I could NOT fall asleep under any circumstances. Well then. This part of the sleep study is narcolepsy-specific and is called the Multiple Sleep Latency Test (MSLT). I had to stay awake until they gave me permission to go to sleep. Every two hours, I was permitted a 15 minute nap. So what do you think happens when you’re narcoleptic, sitting on a bed, and told that you CANNOT fall asleep? You fall  asleep. Repeatedly. After being brusquely awoken several times, I decided to take it outside. It being me, all wired up with goop in my hair holding the electrodes and whatnot to my scalp, looking like an asshole. I went outside to call my mom and chain smoke basically. What else was I going to do? I walked out to scare the shit out of all the people arriving to work in the adjoining suites. Good morning y’all!! When I was finally allowed to go to sleep, I fell asleep in minutes and entered REM sleep in seconds. Diagnosis confirmed.

In case you were wondering what the deal is with the REM sleep: For most adults, a normal night’s sleep lasts about 8 hours and is composed of four to six separate sleep cycles.  A sleep cycle is defined by a segment of non-rapid eye movement (NREM) sleep followed by a period of rapid eye movement (REM) sleep.  The NREM segment can be further divided into increasingly deeper stages of sleep according to the size and frequency of brain waves.  REM sleep is accompanied by bursts of rapid eye movement along with sharply heightened brain activity and temporary paralysis of the muscles that control posture and body movement.  When subjects are awakened, they report that they were “having a dream” more often if they had been in REM sleep than if they had been in NREM sleep.  Transitions from NREM to REM sleep are coolled by interactions among groups of neurons (nerve cells) located in different parts of the brain. For normal sleepers a typical sleep cycle is about 100 to 110 minutes long, beginning with NREM sleep and transitioning to REM sleep after 80 to 100 minutes.  People with narcolepsy frequently enter REM sleep within a few minutes of falling asleep. Narcolepsy Fact Sheet

I’d like to say this was a moment of shock, but I cannot. I had been using my super-ninja research skills long before my diagnosis was made or confirmed and had determined that I either had narcolepsy or some other immune-deficiency disease that caused chronic fatigue. I never returned back to my primary doctor who kept pushing vitamins and better sleeping habits on me. But my research showing that narcolepsy was genetic and was triggered by an infection or other autoimmune event started to make sense to me. I had been diagnosed with mono twice within six years. I was a perfectly normal, healthy child before I ever had mono. After my diagnosis was confirmed, nothing really changed. The fun thing about narcolepsy is that there is no “cure” or real “treatment.” The only option for me was prescription stimulants to fake my body and brain into feeling awake and alert.

Every person with narcolepsy (PWN) is different and experiences different symptoms. One of the major identifying symptoms of narcolepsy is cataplexy which includes: events during which a person has no reflex or voluntary muscle control. For example knees buckle and even give way when experiencing a strong emotion – laughter, joy, surprise, anger – or head drops or jaw goes slack from the same kind of stimuli. Narcolepsy Network At this point, I wasn’t really sure if I had cataplexy. After consulting Dr. Google, I came across forums where people were describing things that I had experienced for years and thought were normal. I won’t pass out mid-conversation or while driving my car. However, when faced with stress and anxiety (my main trigger), my legs go weak and tingly and my knees feel like buckling from underneath me. The same is true for when I get scared (BOO!) or laugh really hard (all the time). I am also overcome with an overwhelming sleepy feeling when I get overly stressed or excited.

A couple of years after my diagnosis, I was working at this law firm, which to me at that time, was big. I was also in the midst of planning our wedding. So basically I had stress coming at me from all directions. While walking down the office hallway one particularly stressful day, I just collapsed to the floor. Like just flat out fell on my ass. Now my cataplexy was in full effect and I had had my first legit fall. Everyone there either thought I was insane or drunk. Shit, I felt like I was insane and wished I were drunk. I fell several more times throughout the course of my employment there and although I tried to be open about my disorder to my coworkers and bosses, they didn’t get it nor did they seem like they wanted to. On a lighter note, I am super fun to take to a haunted house. Man with a chainsaw jumps out from a dark corner? I fall! I was laughing and screaming the whole time and Stabler knew what to expect so we had death grips on each other. Fun times.

Now that BG is a toddler, things are easier, but far from easy. Even with the medication, I have good days, OK days, and goddamn awful days. This topic may not interest everyone, or anyone for that matter. However, I felt it was necessary for me to explain this part of me and why I’ll never be the type of blogger/writer that can post new shit everyday or keep up with 500 forms of social media. If just one person reads this and walks away with some extra understanding and compassion for those of us with narcolepsy, I’ll call it a success. Please feel free to ask me any questions you may have, I am very open! You can either leave it in the comments or shoot me an email at yogapantsmafia@gmail.com.

Side Note: There is much, much more to my story and struggle with narcolepsy. I intend on addressing those issues & experiences in subsequent posts, so stay tuned.

22 thoughts on “Sleepy Sarah: My Life with Narcolepsy Part 1: The Beginning”